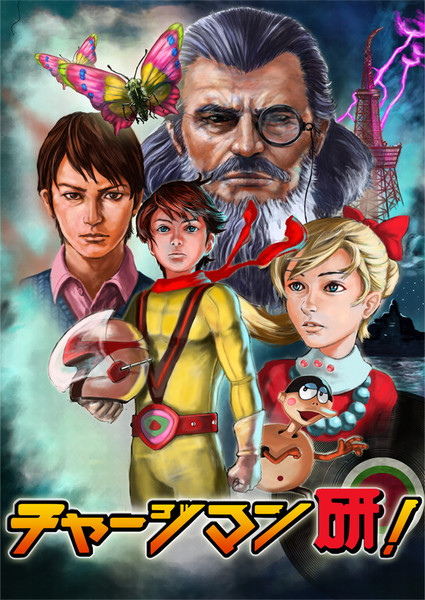 Each episodes are one-shot, and only 10 minutes applied(including OP,ED,CM. Actual length should be about 5 minute and a half).
Because of these restrictions, all episodes are overflowed with Deus-Ex Machina.
Also, this anime is known for its poor direction. For example, sound effects are cut off, enemies are too weak,the hero sometimes gets inhumane, etc.

These series were regarded as a "Phantom" anime for a long time, but
DVD-boxes have been released in 2007.

This anime was presented in an event held by "The Academy of Outrageous Books(Nihon To-Gakkai, 日本と学会)" at June 7th, 2008.

Also, this anime was intoroduced in a Japanese TV show "The Net Stars".

Japanese boradcasting channel "AT-X" has been broadcasting this anime since Nov 28th,2008.

In future ,when science is greatly progressed, Aliens from a planet called "Jural" attacks a city with an ambition to conquer the Earth .
Main hero, Ken Izumi "disguise"s himself as a "Charge man", and fights with Jurals.

Japanese fans choose "3 majour episodes" or sometimes it is called "3 big episodes". All, and each episodes has no relations, so these episodes are perfect for beginners.

The boy who disguises himself into a hero of the Earth "Charge man Ken". For the sake of protecting the Earth, he neglects all minor sacrificees.(quoted via :wikipedia

) He kills all Jurals with no hesitation, even a boy who has been one of his friends(actually he is a Jural disguised as a human boy) or one who shows no intention to fight with him. When he disguises (or sometimes when not disguised) into Charge-man, he can use a flying ship called "the Sky rods" which is known for its hoop which always gives up its job.

Ken's younger sister. She is an acknowledged authority on her skirt's shortness.

An alien clan which trying to invade the Earth. Acording to them, their science is 500 years ahead of that of the Earth. They are an acknowledged authority on their roundabout way of and preparation for attacking; however, they get killed easily with only one shot by ChargeMan Ken in most case. They are really loved with Japanese fans. When Jurals fight better than usual, Japanese fans praise them like "Good Fight!" "Amazing!" "nice boat."

In North-American DVD "jural" is written as "Juralians" so watch with fantastic english dub...